Dog Training & Classes In Newton Abbot Get In Touch

There’s something about Mary! 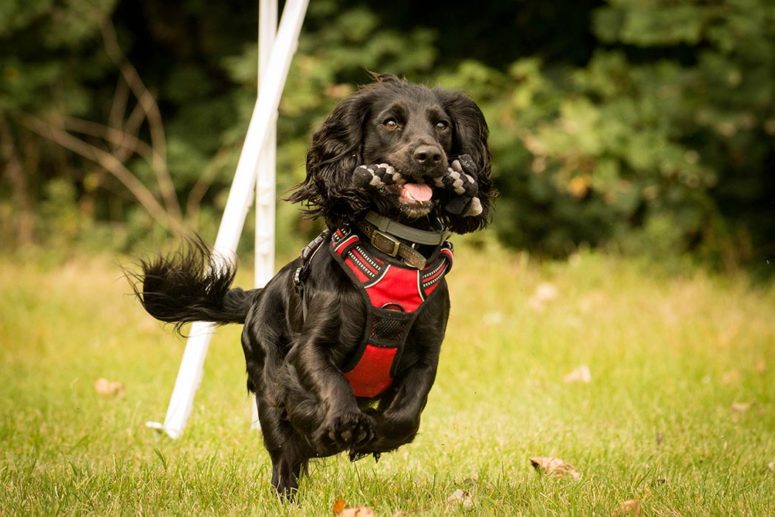 Mary is my puppy.  I collected Mary on Sunday 16th September and she was 9weeks old.  My first entry in my diary about Mary, was “What a beauty”. Mary is 16weeks old now and still a beauty, but as well as being an absolute joy, even for a qualified puppy instructor like myself, having a puppy is time consuming and hard work.  So I thought over the next few weeks I would share some of my experiences with Mary as well as some useful tips to help you if you have recently had, or about to have, a puppy join your family.

The First Night.   The first night can be traumatic for your puppy as he has been taken from his mum and siblings and usually spent the day being cuddled and entertained by his new family and then suddenly at night is left in the kitchen on his own or put into a crate which he isn’t used to.  Imagine how he must feel.  “hey where’s my comfy lap gone that I have fallen asleep on during today”.  Up to now he hasn’t really been very upset at not having his mum or litter mates with him because he has been cooed and clucked over all day and fussed and entertained and fallen asleep in someone’s arms or at their feet.  But now its night time, its dark, no mum or litter mates and no humans to cuddle up to either.  No wonder he kicks off, barking, whining, crying and no doubt scratching at the door!

You will no doubt have been given lots of advice by many people about the first night. Everyone will have a different opinion about what to do, “let him cry for a few nights”, “take him into bed with you”, “sleep in the lounge with your puppy in a crate”, “have puppy in a crate next to your bed”.  Personally I wouldn’t let your puppy cry.  Yes, probably after a few nights he will stop crying but in the mean time you will be laid awake listening to it and it really wont do anything to help your relationship with your dog. All of the other ideas are great and I have done them all at some stage with previous puppies.  But here is what I did with Mary.  I knew I wanted Mary to sleep in the kitchen in a crate.  So I had already made it nice by putting a hard plastic bed but with a nice soft blanket in there ready for her.  The reason I chose a hard plastic bed as her first bed is so that it didn’t matter if she chewed it.  When we got home, I took her out in the garden to do a wee and let her have a mooch around.  She didn’t do a wee at this stage, then I took her indoors to meet everyone and then back outside to see if she needed to pee.  And we repeated this for the next 2 hours, inside to investigate and meet everyone, then outside every 20minutes to see if she needed to pee. I knew she was about ready for a nap, so I popped her in her crate with a stuffed kong.  She whined for a couple minutes and then settled down with her kong and then went to sleep.  She slept for an hour and then when she woke we went straight outside to see if she needed to pee.  Nope, still not done one since I collected her, but that’s fine, she hasn’t done one indoors either which is good,  so I just keep taking her out to give her the opportunity. Gave her some lunch, in her Kong, in her crate and then she had another little nap for half hour.  When she woke, we went straight out to the garden again, but still no pee or pooh.  Back inside for a cuddle on the sofa and then back outside again, woohoo this time she did a pee and pooh.  Back inside for a play and then back outside for a pee.  Then back into her crate with a kong with her mid afternoon meal and then she went sleep again.  Pretty much the rest of the day evening is a repeat of this, regular visits to the garden when she is awake, play time, cuddle time, feed time, sleep time etc.  Each time she was due for a nap I made sure it was in her crate.  So when it came to bedtime, took her out for midnight pee, popped her in her crate with a teaspoon of primula cheese in her kong and off I went to bed.  She slept all night, didn’t hear a peep out of her until she needed to pee in the early hours, at which time I got up and took her out and then put her back to bed.

So basically my point is, that you need to get your puppy used to his crate or where ever you want him to sleep during the first day so its not a shock that first night.  Much as its lovely to have the pup fall asleep on you, if you let your puppy sleep on your lap during the day he is definitely going to cry when you leave him on his own at night.

Housetraining:  Mostly the reason people struggle with this is because they just don’t take the puppy outside often enough.  Or they are using puppy pads!  If you use puppy pads you are teaching your puppy its ok to go to toilet indoors, then one day when your puppy is older you are going to say to him, I don’t want you to pee indoors anymore. Very confusing for the puppy!  so the best and quickest way to house train is to regularly take your puppy outside.  Every 20-30minutes while he is awake, more regularly when playing and immediately on waking and about 20mins after feeding.  Be prepared to get up at least once during the night to take your puppy out to pee, until his bladder gets stronger.  If your puppy has an accident indoors, DO NOT rub his nose in it or scold him.  You will only make your puppy scared to pee in front of you.  Instead get a rolled up newspaper and give yourself a smack while saying “I must be more vigilant”.  lol.  If your puppy has done a pee on the floor it is because you haven’t taken your puppy out regularly enough or you haven’t watched for those tell-tale signs that pup needs to go out.  Several times on the first day, when Mary joined our family, she didn’t pee when I took her outside so I brought her back in and then tried again 5minutes later.   When your puppy does a pee outside, tell him he is a good boy and give a treat, have a party.  Puppies that are left to wander around the house without proper supervision will often take longer to housetrain because they will just pee/pooh wherever they are and if your puppy is not in the same room as you then you wont notice he has done a pee or pooh until you stand in it later on!

Chewing:  A puppy that is allowed free roaming around the house, without supervision will most definitely end up chewing something you don’t want him to chew, whether it be a kitchen chair, your slippers or the remote control.  So if you need to go the bathroom or are going for a shower and are busy doing something then the best place for your puppy is in his crate.  As long as he has had all his needs met then popping him in his crate with a kong and something appropriate to chew on, will keep him out of mischief, teach him what he is allowed to chew and also give him much needed nap time.  Mary has been given no opportunity to chew anything she shouldn’t as when I am not able to be in the same room as her she is in her crate.  When she is not in her crate and we are hanging out together in the kitchen or lounge, she has access to lots of appropriate chew items and toys.  If she looks like she is about to chew something that I don’t want her to, I can distract her with one of her toys, before she even starts to chew it or I can place something appropriate in her eye sight so she picks that up instead.  One of the things she likes the most, to chew is some wood.  This is not any old wood as puppies can get splinters from normal sticks and logs. This wood is called Antos natural dog root and can be bought from most pet shops. Its long lasting and wont splinter and is hand-harvested from an eco-sustainable source.  Mary also likes her puppy Nylabone.  One thing Mary will not be having is any rawhide chew items as these are full of chemicals and not easily digested.

Biting:  Puppies have sharp teeth and you will certainly know about it if your pup catches you with his teeth while playing.  Puppies often get a bit bitey when they are teething so it is important to offer appropriate things for your pup to bite down on to help with the teething process, such as a Kong, a tuggy, a Nylabone, a carrot stick taken straight from the fridge.   Puppies will also bite when they are over-tired!  Puppies need a lot of sleep, between 18-20 hours per day, so putting them to bed regularly, as I did with Mary on her first day with us, not only teaches them to be enjoy being in their crate but also helps to avoid living with a shark.  If your puppy is getting a bit ‘shark like’ during a game, its because he is getting over-aroused/excited. Offer him a tuggy type rope toy to chew on or play with.  if he doesn’t seem to want that and starts trying to latch onto your clothing or skin, then he is probably over-due his nap.  Get your pre-prepared Kong from the fridge and pop your puppy in his crate with the kong.  Now he has an appropriate chew item that is soothing and satisfying and once he has eaten the contents of his Kong he will have a nap.

So if you have been considering using a crate for your puppy but are undecided, hopefully you will realise that used appropriately a crate can help prevent unwanted soiling, unwanted chewing and give your dog a safe place to sleep.  Puppies need to be put to bed regularly so they get plenty of nap time without getting over-tired and “wired”.  Much like we put human babies into their cot regularly throughout the day for a nap, we need to do the same with puppies.  So the first few weeks with your puppy are pretty much sleep, pee, play/train, feed, poop, sleep, rinse & repeat!  It’s hard work and time consuming but so worth it. If you want any help with your puppy get in touch or sign up for one of my puppy classes.

Sign up for our new online puppy training course!

This online course is designed for those that may not be able to attend weekly classes or would like to start training their puppy before they have completed all their vaccinations and able to attend classes.

By continuing to use the site, you agree to the use of cookies. more information